Take enough yoga classes and you’ll eventually hear one of your teachers quote from Patanjali’s Yoga Sutras, an ancient guide to classical, or raja (royal), yoga. Written approximately two millennia ago, the text isn’t long – it is made up of 195 short one line aphorisms (called sutras). But it is very dense, and open to different interpretations, which means it continues to be studied and discussed by yoga practitioners and scholars today.

The Sutras are attributed to Patanjali, although no conclusive evidence exists as to who he was. One of the few statues in existence shows a man sitting on a coiled up snake. Nobody knows either quite when they date from, as they would have first been passed down orally. They were short and just contained the essence of yoga philosophy, and were learnt by chanting the lines.

The Sutras act as a guide to the practice of meditation, and make little reference to the active postures we do in class today. Amongst many other things, they outline the eight-fold path leading to liberation, known as the ‘Ashtanga Yoga System’ or ‘8 Limbs of Yoga’. They are written in Sanskrit, the holy language of India, which is probably the oldest spoken language in the world still in use today.

One myth relating to Patanjali says that in order to teach yoga on earth, he fell from heaven in the form of a little snake, into the upturned plans (a gesture known as anjali) of his virgin mother, a powerful yogini. The myths draw on the rich pantheon of Hindu gods – for instance, he’s regarded as an incarnation of the thousand-headed serpent-king named Remainder (Shesha) or Endless (Ananta), whose coils are said to support the god Vishnu.

We began this week with a short sequence to warm up all the joints in the body, from head to toes, which I learnt on my recent visit to India. The teaching I encountered all put great emphasis on moving with the breath, moving into and out of the postures with the inhale and the exhale. We ended the lesson with the OM Shanti Shanti Shanti chant, which I also found commonly used.

If you find time to practice at home try to remember to use the yogic breath: a three part inhale, first into the lower, then the mid, and lastly upper chest, and a similar pattern on the exhale.

Below you’ll find a reminder of the kneeling salute to the sun sequence, and the Prayer to Pantanjali I passed around in class. 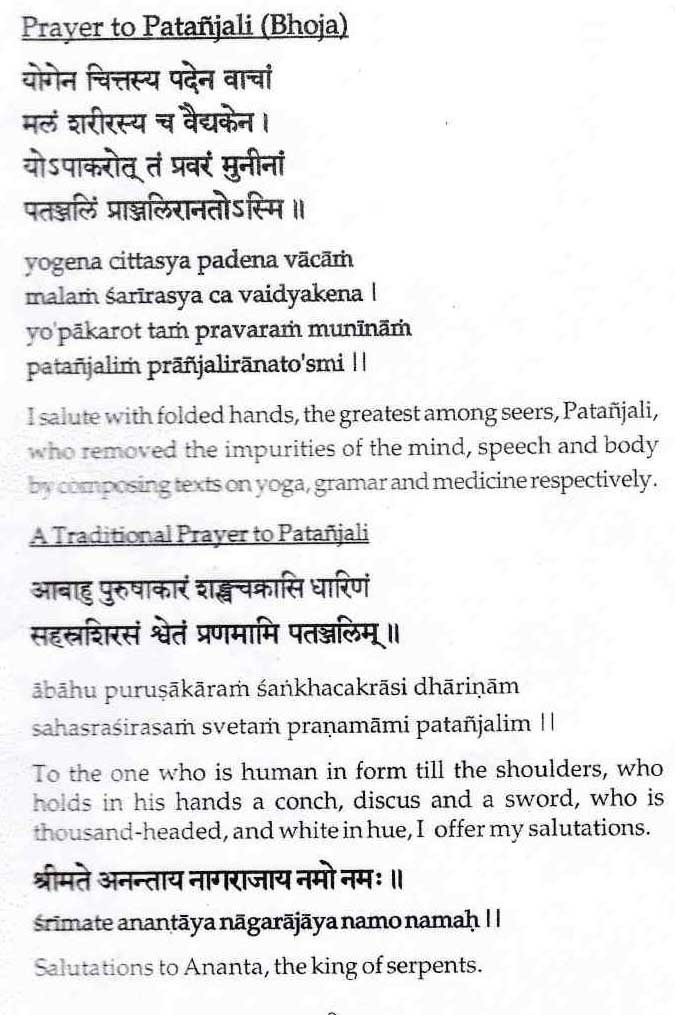